I’m back after my three-month hiatus… I couldn’t be happier.

So what else happened to stop me from blogging (and working out) for so long? Well, As it turns out..I am pregnant! OK, so?

There is such a thing as working out when you’re pregnant…it’s actually a huge thing with an enormous social following, noted health benefits and is widely recommended by doctors and midwives. (What? It’s not the 19th century? I can do things while pregnant??) Crazy.

I have written in the past about the invincible feeling that working out can give you. Combine that with being in your mid 20’s and generally happy, it’s pretty much omnipotence. I have also written about how to pay attention and take care of your body. I have written about injury and allowing fitness to overcome sensibility.

Now I will tell you a little bit about how all of these factors combined put me in the worst pain I have ever felt, and can possible imagine.

No one besides Olympic athletes get injured, especially from Pilates, Barre, and the occasional jog, and especially not a 25 year old, I told myself. Well…. My experience with lower back pain began almost two years ago. I responded with a tough-it-out type of attitude, not knowing how this detrimental this would be. The pain came and went. Sometimes it was excruciating to the point that getting in and out of my car or bed were the worst parts of my day. Then it would subside, and life went on. A handful of acupuncture treatments yielded no results, so I went back to toughing it out.

Close to my Pilates certification test out date, I began having a sharp stabbing pain in my hamstring. It felt like a really bad pulled muscle, and I assumed it was that. I thought I was taking care of myself by maintaining my fitness routine and focusing on stretching and not pushing my body AT ALL. The pain got worse and soon working out was impossible. The pain was shooting down my leg, pulsing, making walking difficult and sitting impossible. I started physical therapy and was diagnosed with a herniated disk in my lower back. I started seeing a chiropractor who said the same.

One afternoon, I hauled my staggering self downstairs and laid down in the back of an Uber to get to my physical therapy appointment. Five minutes into the session I was shaking and sweating with pain. Tears were pouring down my face (I’m thinking that when this happens, the physical therapist says “Hey maybe this isn’t working for you and you need medical attention..” Oh well). I collapsed in the parking lot after my session while waiting for my Uber to take me home. I was bawling, crying out in pain, squatting awkwardly on a patch of grass in between a Dunkin’ Donuts and the PT office. I was mortified, I didn’t want anyone to look at me of talk to me. I was terrified someone would walk over to my pathetic sobbing self and try to offer me help.

It got worse and worse. I was in constant agony, and the only medication permitted due to my pregnant self was Tylenol. Soon I couldn’t walk. I was sleeping on an air mattress and crawling to the bathroom only when I absolutely had to. I couldn’t shower, I couldn’t lie in the bath tub. I couldn’t feed myself because since I couldn’t stand, I couldn’t cook. My chiropractor informed me that he would not continue treating me without an MRI because my pain was too severe. However I couldn’t get an MRI because of my pregnancy. I tried to make appointments with Spine doctors and surgeons but was turned away for treatment because there were no safe treatments for a pregnant chick.

This went on for almost 4 weeks. My life was a blur of trying to spoon food into my mouth while lying flat on my back and battling dehydration because peeing was so painful. My nights were sleepless as I spent them awake in tears, screaming in pain and frustration for hours. There was no end to my pain and I couldn’t fight it any more. It was getting worse, nothing helped, and there were no  positions that provided relief. The melted lava running down the back of my leg combined with thousands of knives stabbing into my hip became a part of my life. 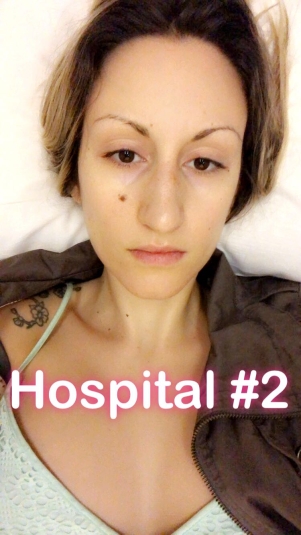 One night I screamed for hours and hours. I just laid there screaming. My sister decided it was time to go to the hospital, where I stayed for a week. Teams of unorganized doctors prescribed me low doses of useless medications that were ‘safe’ during pregnancy, and then proceeded to not give them to me on time, leaving me to lie there in misery, disturbing other patients with my cries of pain. They talked about surgery and steroid nerve blockers but were reluctant, told me they wouldn’t work anyways, and I should just give it time. Time went on and I left the hospital because they wouldn’t help me. No one would help me!

(Side note: I was actually admitted to 2 hospitals, and was treated at three. Three hospitals.)

Our search for doctors continued and finally we made an appointment with surgeon who would treat me. When I crawled into his office panting, promptly lying down on the waiting room floor, he scheduled surgery for the following day.

It worked instantly and I was discharged the same day. 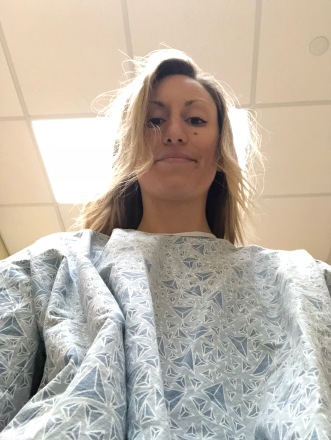 I won’t bore you with the details of my recovery and how the little things in life, such as standing, have never meant more to me.

I look back on posts from before my injury. Fitness can become an obsession and the importance taking care of yourself and listening to your body. The fear of what will happen when you stop working out. Now that I’ve gained significant poundage and haven’t worked out for close to three months, let’s just say my priorities are somewhat changed. Am I sad I can’t work out? Not compared to how happy I am that I can walk. 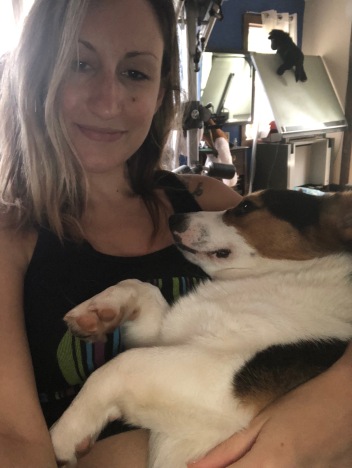 Me: excited to be a people mom as well as a fur mom.

4 thoughts on “My Back Injury and Pregnancy”

Enjoying Life, as Mom and Wife!

Damn, Girl. Get Your Shit Together.

Unsolicited advice for shit you didn't know you were doing wrong

Fitness, Exercises, Workouts and Shopping too!

Seeking the beauty found in the midst of chaos

It's Not Hou It's Me

Unique perspectives on movie marketing, film reviews and much more.