We’ve had some great weather for the past few days, so I have been moving my routine outside. It’s reaching the end of August so it seems like a good idea to soak up as much sun as possible and enjoy the greenery while it lasts!

Working the back body has always been such a struggle for me. I actually believe that because I can’t see it when I look in the mirror I forget that it’s there. That being said, it is so important to build strength evenly throughout your whole body. It is what you don’t see that makes all the difference.

And so we begin with the first pose: Plank

Plank pose is popular within all areas of fitness and is known for its amazing full-body benefits. Plank position strengthens the core, both the inner and outer thighs, the abdominals, the shoulders, the upper back, the glutes, the arms…. 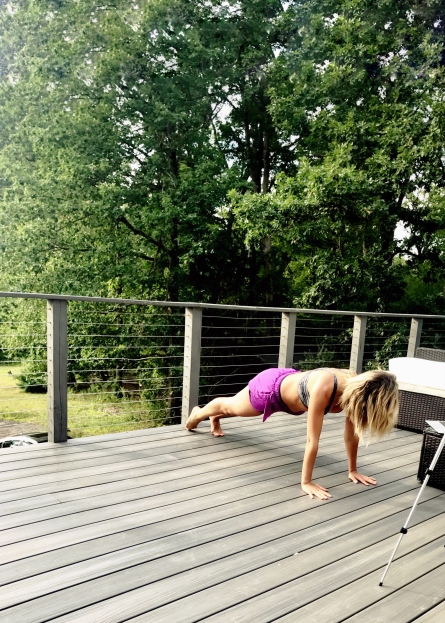 In my opinion, plank is one of the positions where we really choose how hard we work. It is possible to ‘fake’ this particular position. When I say fake it, I mean that we are not consciously activating all of the appropriate muscle groups. In order to work the glutes, you must make a conscious effort to engage them! The same goes for all of the afore-mentioned muscle groups.

We don’t want to wear our shoulders as earrings…

Engaging all the muscles while trying to maintain a nice form does take practice. Often times I’ll find myself focusing so much on one muscle group, I forget another and so on. After time, as the muscles strengthen, they automatically engage which allows us more freedom to focus on alignment.

Pose Two: Up Stretch (Down Dog)

Up Stretch in Pilates, possibly more commonly known as Down Dog in Yoga, is our second flow position. 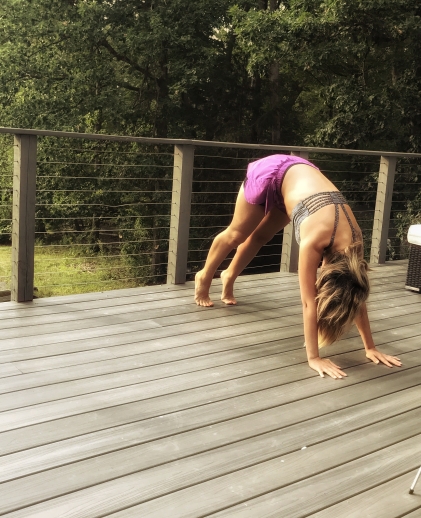 Up Stretch helps improve flexibility in the hamstrings and increases strength in the abdominals, the back, and the shoulders. My hamstrings are generally tight so I need to warm up considerably in order to achieve the flat-footed up stretch we are familiar with, not shown here.

In the picture above I have my weight shifted forwards onto my hands which increases the work of the shoulders and upper back. Just like in plank pose we want to maintain strong shoulders, not allowing them to shrug. Keep the neck long and let the shoulder blades to slide back towards the tail.

Play around with shifting your weight forward and back. Try leaning forwards as I am, and then shifting back to put most of your weight on the balls of the feet. Notice what different areas of the body are forced to engage and which muscles are feeling the streeetttcchhhh.  (aaahhhhhh).

There are many variations of this exercise including running in plank position, where we bring in alternating knees to kiss the nose while holding plank. This variation focuses on strengthening the obliques. I struggle particularly with keeping my hips square to the floor in this particular variation.

This is really a fluid movement (as are they all) in which we engage both the back and front bodies, however we also focus on the rotational plane of movement when we reach the knee to the opposite elbow. Coming into a round back position as the knee reaches in opposition helps send the knee further towards the elbow. This also increases flexibility in the spine.

The back body exercise swimmer has many variations. We can focus on merely lowing and lifting the upper and lower bodies, holding, and then releasing back down. The variation demonstrated in my photo shows me actually ‘swimming’ in which you lift up, creating a curve from feet to crown of the head, and ‘swim’ the arms and legs in opposition.

I think of this movement like a Pilates ‘hundreds’ for the back body, or a reverse hundreds series. We move in sequence with the breath, for or five breaths in, the same number exhaled. 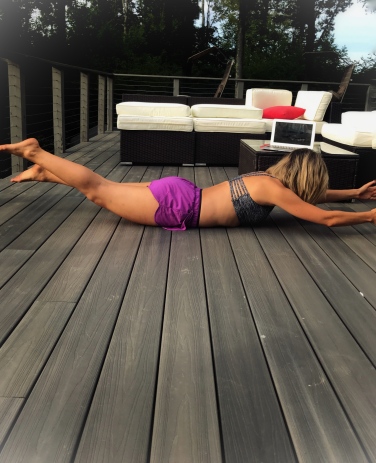 Just like the previous three exercises, try to engage all of the muscles. Alignment always starts from the feet, so pointing the toes will help create that long line we are always trying to achieve in Pilates.

Reach the arms forward meanwhile slide the shoulder blades down the back.

Lift the legs from the glutes.

Squeeze the glutes and reach the toes so far back that they just float up. The same goes for the upper body.

That’s it guys! Quick, easy, effective, and relaxing. I use this routine before and after my workouts to warm up and cool down. It is also a great morning routine because it doesn’t demand too much from your body before it’s completely awake.

Hope you enjoyed! Let me know in the comments below which exercise is your favorite!

Enjoying Life, as Mom and Wife!

Damn, Girl. Get Your Shit Together.

Unsolicited advice for shit you didn't know you were doing wrong

Seeking the beauty found in the midst of chaos

It's Not Hou It's Me

Unique perspectives on movie marketing, film reviews and much more.